As market uncertainty continues, the ability to predict future trends is a hot commodity. In a recent Manulife Investment Management market call, Chief Investment Strategist Philip Petursson offers his take on how the first half of 2020 will continue to influence the rest of the year and into 2021.

“This has been a fascinating and frustrating market where normal market activity doesn’t seem to apply,” says Philip. “The so-called Robinhood day traders are influencing markets, sports gamblers are now day trading stocks where they’d typically be focused on basketball, baseball, and other sports. With markets climbing higher, and some companies now trading at 52-week highs, we have to try to understand how we got here and where we are heading.”

Philip attributes this current market to a bad case of GAS — general adaptation syndrome. How markets respond can usually be traced back to basic human psychology and the three stages for how humans respond to stress — panic, reaction, and exhaustion.

The panic phase kicked in mid-February when the S&P 500 fell by 35 per cent in response to the spreading COVID-19 pandemic. Consumers scrambled to stock up their pantries while companies scrambled to accommodate employees who were thrust overnight into work-from-home situations. What would this mean for earnings and company profitability, and what would a recovery look like?

The reaction phase takes us from mid-March to the end of May and the rollercoaster of market volatility, with trading moving up and down by about 8 per cent. It was a time of trying to make sense of uncertainty and finding to find some stable footing in a new normal.

The exhaustion phase began in early June and continues to present day, where consumers and business owners are mentally tired from ongoing distancing measures, hopeful as restaurants and some businesses begin to open but wary that we still have a long road ahead.

So, where do we go from here? Philip offers some insights.

Forecasting the next 12 to 18 months

“The U.S. Federal Reserve is a very powerful force, and what the Fed has done to support these markets I would equate to a large anti-depressant,” says Philip. “2020 is a mulligan, a year that no longer matters. 2021 is really what we’re looking at.”

According to Philip, portfolio rebalancing takes into consideration that earnings data for Q2 will be awful and Q3 may see only modest improvements. “In our base case, we’re plotting in a recovery in earnings for 2021 that’s going to get us very close to where we were in 2019. Our assumption is that 2021 is going to be what 2020 would have been if we didn’t have a pandemic.”

So, here ‘s how things may play out, with Philip’s probability ranking:

“I also think that valuation is going to remain a bit higher than what we’ve seen in the past, and the reason for that is because we think the Fed is going to continue being very accommodating in keeping their interest rate policy right around zero. In recent updates from the Fed, it’s been stated that they don’t expect to raise interest rates until 2022.”

The wild card in this economic recovery may be the potential for a second wave.

“How do we consider the potential for a second wave of the coronavirus that might trigger a second economic wave or relapse where we see conditions shut down again? We’re not factoring that in at this point. We’re using the current environment in the U.S. as a bit of a guide — Texas and Florida are seeing spikes in infection rates and hospitalizations, and there’s a resistance to shutting down their economies again.

I’ll let history decide what would have been the right decision, but given what we’ve gone through, I think there will be a reluctance for governments to shut economies down if we see a second wave. I think governments will try other measures, such as mandatory face masks, before they would move to shut down the economy for a second time.”

In the meantime, portfolio modeling indicates a 75 per cent probability of an average to better return over the course of the next 18 months, with investment fundamentals such as dollar-cost averaging a key factor.

“With hindsight being 20/20, I would have loved to have increased our equity weight to 70 per cent from the 55 per cent that we took it up to. But I stand by our investment decisions at the end of March. Given the fundamentals and the risks at that time, our team felt that only a 5 per cent increase to equities was prudent.”

Along with dollar-cost averaging, Philip’s team is now looking to adjust their portfolio model up to a neutral position made up of 60 per cent equities and 40 per cent fixed income and shifting from core bonds into global equities.

“When we look out 12 to 18 months, we see a higher interest rate environment. That may impede some performance on traditional government long-duration bonds but favours corporate bonds and high-yield bonds in this market that is well-supported by the Fed. We also anticipate very attractive yields over the next 12 to 18 months, which we think is a sufficient amount of time to absorb any rate increase and leave us with a positive return over that time period.”

While no one could have predicted a global pandemic, Philip feels that swift action by the Federal Reserve has greatly helped to stabilize the financial shocks — with much more positive effect than when quantitative easing was used to stabilize the 2008 financial crisis.

When QE gets "into" the money supply, the markets respond. 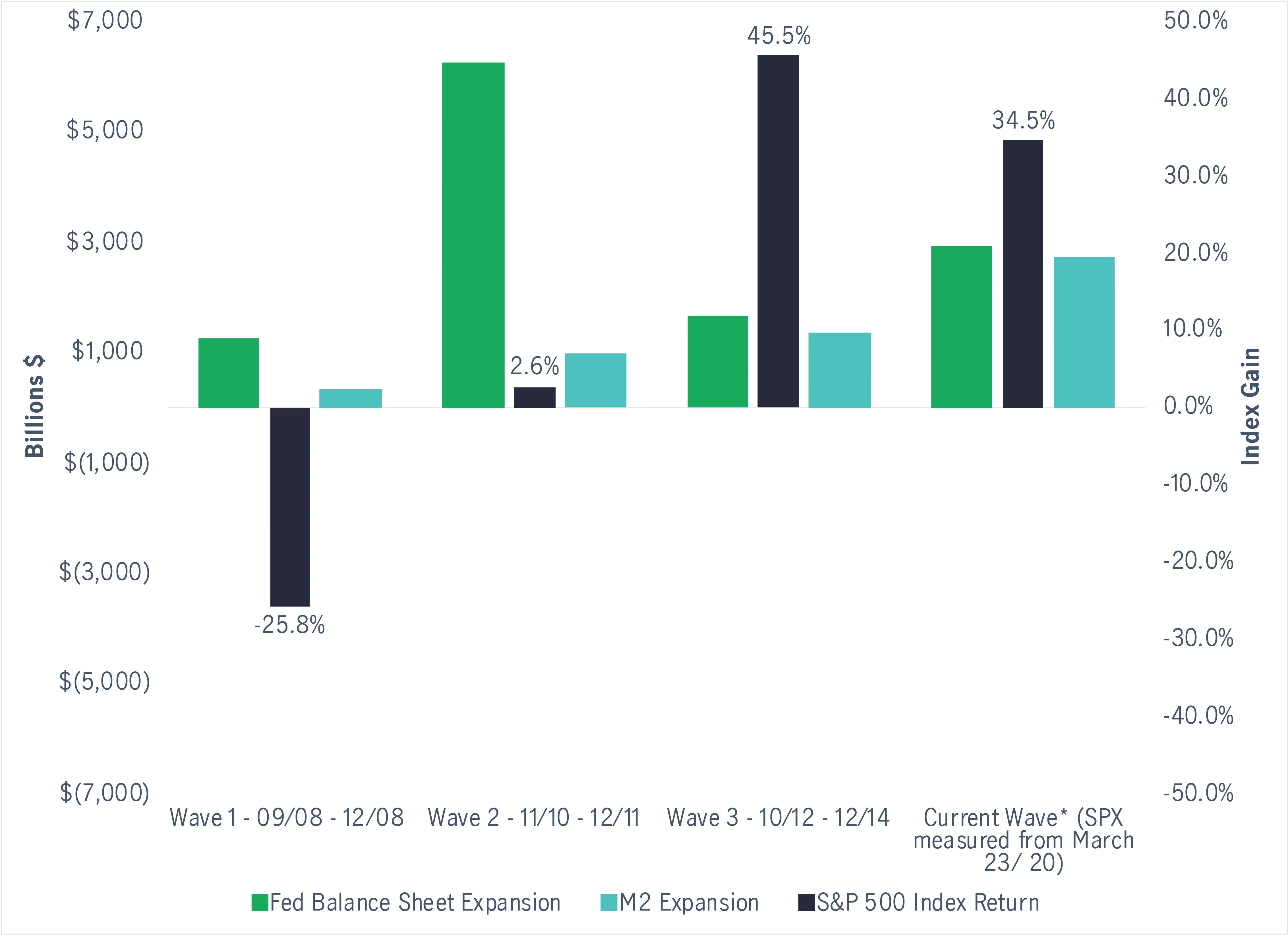 “The problem in 2008 is that the banks just held onto that cash. They didn’t lend it out, it didn’t get into the money supply, and it didn’t have the impact that the Fed wanted. This go-around, the Fed has been much more successful — increasing its balance sheet by about $3 trillion, with money supply also increased by about the same amount. I believe this has helped to prop up not only the credit markets, but the equity markets as well.

But the question going forward is: what is the long-term effect of this? The consequence can be inflation.

Given current unemployment rates in Canada, there’s little doubt that consumers will be feeling the financial stress from this latest economic shock.

“Currently, Canada’s debt service ratio is sitting at 13 per cent, which is quite high considering on an apples-to-apples basis, the US is sitting at about 9 per cent. So, more of our disposable money is going to service the debt, with 15 per cent of the Canadian labour force unemployed.”

“I think this can only result in a weaker housing environment. The Canada Mortgage and Housing Corporation (CMHC) has predicted an 18 per cent drop in housing prices, which I think will lead to an overall weaker housing market. Will this affect banks? Well, a lot of bank exposure is to insured mortgages, but I also think banks are well positioned. They are well diversified, well capitalized, and I don’t think we are going to see outright defaults on mortgages in Canada. You might see a greater impact on housing prices and housing activity, which will lead to a weaker Canadian economy overall, as housing has been a key economic driver in this country over the last 10 years.”

In terms of good investment opportunities — look to gold.

“Over the long term, gold has correlated with inflation. If you want to hedge inflation today, I think gold is a good way to do it. I think it’s currently undervalued and we project a rise to $2,100 per ounce. Manulife’s asset allocation teams have been increasing their positions to gold, seeing gold rise from $1,400 an ounce in mid-March to current levels of around $1,750.”

And for some final thoughts, Philip ponders the impact that this coming November’s U.S. election may have. Either Democrat or Republican, whoever holds power at the White House might not really matter all that much.

“We always try to read into what the potential market impact could be if Trump is re-elected, and all the various scenarios that could happen. But the truth is, the markets, on average, go up. Markets go up 70 per cent of the time. But, statistically, Democrat-led government tend to enjoy stronger market returns. When you dig into the reasons why, it seems that Republican-led governments seem to suffer recessions more often. And there’s isn’t a compelling reason why this is, other than how business cycles line up with election cycles.”

In one of Philip’s scenarios, if Trump is re-elected with the Democrats controlling the Senate and Congress, then that form of gridlock might actually be favourable for markets.

“The markets historically tend to favour this type of scenario because the government can’t interfere too much with business.”

But regardless of who wins the White House, Philip says, the strength of the market will be determined by the strength of earnings growth. It will all really come down to how well the US and global economies recover from the pandemic lockdowns.